Ico Parisi’s career began in the early 1930’s in the Studio of Rationalist Architect Giuseppe Terragni. Here, through exposure to the abstract theories of Alberto Sartoris and the Gruppo di Como, Parisi encountered the then radical modernist doctrine of the integration and synthesis of architecture with the arts that would play an important role in his later work. In 1945 he organized the first of a series of contemporary furniture exhibitions in Como, and in 1947 married Luisa Aiani, a former student of Gio Ponti at the Milan Polytechnic and fellow member of the Alta Quota. After receiving prestigious commissions that same year to design furniture for the State Library in Milan and the Casa Fraccaroli, they founded in April 1948 the design studio La Ruota at via Diaz 24 in Como, thus beginning the exchange of ideas and contradictory influences that defined the husband and wife partnership’s remarkable career.

The Parisi’s would go on to design over 150 interiors and La Ruota would become the meeting place for collaborations with artists including Lucio Fontana, Fausto Melotti, Bruno Munari and Francesco Somaini. Among their earliest architectural commissions, and also some of the first examples of Parisi’s synthesis of art and architecture in action, were the Casa Carcano in Maslianico of 1949, in which both Radice and Melotti were involved, and the Casa Notari at Fino Mornasco, again with Mario Radice. Working first with a select group of local artisans that included Spartaco Brugnoli, the Fratelli Rizzi, Ariberti Colombo and Arte Casa, Parisi’s organic furniture designs for these and other early commissions were showcased to immediate acclaim in Milan and in the pages of Domus magazine. Soon after, they stood alongside the work of Albini, Buffa, Chiesa, Minoletti, Mollino and Ulrich at the 34th Salon des Artistes Decorateurs in Paris as testament to the international ascendance of contemporary Italian design.

These early successes led to significant collaborations with companies including Cassina, M.I.M., Singer & Sons, Altamira, Longhi and Cappelini. Not least amongst these was Parisi’s long and successful relationship with Cassina that led to the Model 691 (nominated for a Compasso d’Oro in 1955), the Model 839 Conca (nominated for a Compasso d’Oro in 1955 and a Gold Medal at the exhibition Colori e forme nelle casa d’oggi, Como, 1957), and the iconic Model 813 Uovo. In response to the 813’s lauded debut in 1951, a letter to Ico from his close friend Gio Ponti, preserved in the Parisi archive, reads as follows: My dear, your egg chair is a marvel. You are a master, and all that is left for me is to retire and live in Civate in oblivion. 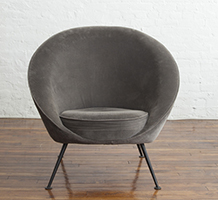 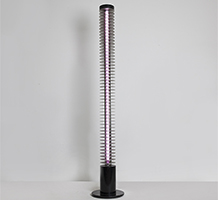 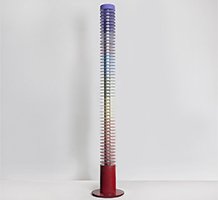